For those that missed it.
http://www.nbcwashington.com/news/local-beat/Wounded_Warriors__Gone_Fishin__Washington_DC.html
Posted by DIRTMAN at 4:57 AM No comments:

VAO Tournament on the Potomac

Lee and I fished the Virginia Outdoors Weekend Series on Sunday and came in fifth place with 12.43 lbs. First day out this year that there wasn't much wind. We hit a lot of our main river spots and just could not get a big fish bite going. Caught about 18-20 fish and culled twice. Lee did miss the big fish for the day with a 4.50lbs. fatty, only to be beatin out by one of our members by .03 lbs. Oh well. A nice day to be out with my son and fellow VAO members.
Posted by DIRTMAN at 4:32 PM No comments:


Saturday, May 15, 2010 of Armed Forces day was a great day to celebrate the sacrifices of our men and women in uniform. 52 servicemen and women arrived at Leeslyvainia State Park, VA and were paired with professional and local bass angler along with a sponsor for great day on the Potomac. This time there was a twist. They were not looking for that 5 fish limit they were hunting that one big Potomac river Bass. The big fish format allowed them to concentrate on different areas that are known to hold the bigger fish that the Potomac is known for. It also helped keep the mortality rate of the catches for the day to 0. That means that all fish were released and survived to be caught another day. My hats off to the boaters for their fish management.

“The day started early for all but it was worth it. Just to see our Nations Heroes with big smiles on their faces makes this event a blessing.” Angie Kirk said. This year the team of Angie Kirk and Brian Green, A local Tournament Angler and One Stop Boat Shop Pro Staffer, contacted all of the boaters as Marsha Stumpo of Angler Development headed up the administration staff of the PVA- Outdoor Recreation Heritage Fund worked with all of the others to make this event a pleasure for the Heroes.

Ken Kirk, a Local Fishing Guide, Started these events over two years ago with a U.S. Army Chaplin from Ft. Meade. Since then they have gotten bigger and better every time. “We had our Heroes come from all over the place this year.” Kirk, Said. “It was hard just keeping up with the different commands that wanted to be a part of this.” There were Heroes from Ft. Meade. Walter Reed Army Med Center, Portsmouth Naval Station, Ft. Eustis, VA., Ft Belvior, VA , Quantico Marine Corps Base and Ft Bragg, NC.


According to the boaters, most of the Heroes caught fish but all of them have a great time. It is great to see a community come together to support our troops.

As the boats returned after the day on the river smiles lit up the faces of the heroes as they weighed in their fish. Coming in 3rd place was the team of Randy Quesenberry with his Hero Army Spc. John Marlett. Their biggest fish weighed in at 4 lbs. 5 oz. Second place fell to the team of Ret. Marine Mark Light and his Hero Army Spc. John Ray tipping the scales with their Bass of 4 lbs. 6 oz. The Second Annual Spring Bass Challenge was won with a Big Bass Weighing in at 4lbs 11 ozs.,by the team of Ret Marine, Tim Barrons and his Hero Sgt. Steven Rush and Mike Worley. I asked Tim if he had a good time and he said that this was his first event and he and the heroes had a great time on the water. He also stated that he will do these events from now on because he sees what it means to our Nations Heroes. The top 10 in the standings look like this.

There was a mix up on the first place Out of the Money The award went to the team of Larry Cable and GySgt Alan Frederique with 2.13 but we were going by length to break the ties, so the team of Don Zaegel, his Hero, Cauldwell were 1st out of the money with 3 lbs and 18.5 ins. With the new format it takes some time to work out all of the bugs.

All who attended the event had a great time and we are looking forwarded to the Lake Anna Fall Bass Classic on September 25, 2010.

See you on the water. 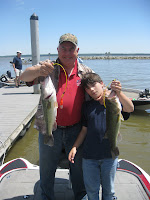 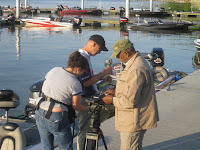 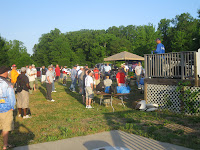 I fished the Wounded Warriors Tx out of LSP yesterday and, as usual, we had a blast. This is a well run Tx by Ken Kirk and his group who this year, linked up with PVA (Paralyzed Veterans of America). If you have not yet fished one of these, I can honestly say, you don't know what you're missing. Such a wonderful cause to get our soldiers out on the water for a day.

Met the group at 6AM as blastoff was 8AM. Chatted with a lot of fellow anglers, sponsors, etc. A film crew and Jim Vance fron NBC4 was there shooting, and Vance actually fished the TX. Great guy. He said it should be aired Tuesday or Wednesday night at 6PM.

I did not draw a wounded warrior this year, but instead hooked up with a fine gentleman and his son. Randy West and Little Randy. General Randy West heads up the local fundraising effort for PVA and works with some great sponsors we had this year.

Fishing was tough yesterday, as the wind was relentless. Being as this was a "big fish" only Tx, I decided early on to throw mainly big fish baits. I guess it worked out OK. Our biggest fish was 4.00 lbs. even and we came in fifth. Jim Sutton (you dog) came in fourth with 4.01 lbs. 4 lb 11 oz. won it.
Posted by DIRTMAN at 6:09 AM No comments:

I realize that not everyone is a fisherman, but many people do own boats. Do you (as a boatowner) really know the water you cruise on? Probably not as well as you should. I can help you with that problem. I am now offering to show you "Lake Anna". If you need one or more of following, please call me at 540-222-5420 or e-mail me at gotdirt@martinsmaterials.com for more info and rates. Thanks.
***Learn Lake Anna from the water before buying, renting or building a house or purchasing a waterfront lot.
***Learn what hazards, shallows, underwater obstructions and no wake areas exist on the lake, as many of these are not marked or shown on maps.
***Learn lake restrictions, safety gear, required boating courses, etc.
***Learn areas for fishing, swimming, water skiing, beaches, etc.
***Learn the area marinas and boat shops and what they supply and work on.
***We use my 21' Triton Bassboat and can carry up to three people.
Posted by DIRTMAN at 1:00 PM No comments:

DIRTMAN
HI.....My name is Larry Martin (aka "Dirtman"). I am an excavation contractor & dirt broker in Northern Virginia, living in Warrenton, Virginia. I grew up fishing the Chesapeake Bay and off shore in Ocean City, MD. Since marrying my wonderful wife of 37 years and having three great kids & moving to Warrenton, I transformed from a saltwater fisherman to one that chase's the little green fish. I run a '06 Triton 21X with a 225 Pro XS. I try to fish as much as I can with my son, Lee and other great guys I have met through the years. I mainly fish Lake Anna and the Potomac River but don't rule out local lakes. Hope to see you on the water. 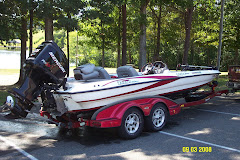